Sig O’Rourke, a spunky black Labrador retriever, also known as Mr. Personality, joined Kathy and Pat O’Rourkes’ home when he was five months old. The couple has had many dogs over the years, but never a male, and they weren’t quite sure what to expect.

“He’s the sweetest, best dog we’ve ever had,” said Kathy.

According to the couple, Sig loves everything from people to dogs to swimming and playing in the snow. He’s so friendly that when out for walks, he will stop and sit to allow strangers to catch up so he can say hello. 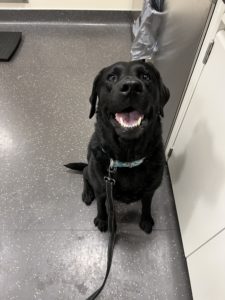 The only challenge over the years has been a struggle with allergies. Since he was a pup, Sig has required a special diet and allergy medications.

So, when his eye started watering last fall, the family thought it was just allergies. However, they became concerned when blood and discolored discharge ran from his nose and quickly scheduled an appointment with their veterinarian near their home in Colorado. Antibiotics helped for a time, but then the symptoms returned. Unfortunately, additional diagnostic testing didn’t provide answers.

Still uncertain, the family headed to their second home in Tucson as planned. Shortly after arriving, Kathy noticed a spot on Sig’s gum when she attempted to give him a new allergy medication. Worried about the unusual growth, the O’Rourkes visited several veterinarians. Ultimately, Sig was diagnosed with squamous cell carcinoma.

Pat and Kathy were shocked. How was it possible that Sig, who was only three years old, could have cancer?

Once the disbelief subsided, they set to work searching for a veterinary oncology specialist. First, they tried in Tucson, then in other locations throughout the state, but every call resulted in the same answer – no appointments for more than a month. Next, they extended their search to Texas, where they had family. Same wait time. Upset and frustrated, they called their veterinarian in Colorado, who encouraged them to contact Colorado State University’s Flint Animal Cancer Center.

“We were referred to CSU by two veterinarians, both saying it was Sig’s best chance for survival,” said Kathy. “We looked at the CSU website and read about all the different treatment options, comprehensive assessments […] What convinced us was the multidisciplinary team working together that would help determine the best treatment for Sig.”

Kathy called CSU, and as luck would have it, they had a cancellation. So without much more thought, the family headed north in early January.

On their first visit to the FACC, the O’Rourkes met with radiation oncology resident Dr. Patricia Gualtieri.

“She shared the good, bad, and the ugly, and we really appreciated that,” said Pat. “After talking to Dr. Gualtieri, we had more clarity about what we needed to do for Sig.”

Following a thorough examination and additional diagnostics, the team at the FACC discovered that Sig had an aggressive mass on his right upper jaw that was invading his nasal cavity. With this new information, the team determined that surgery was not the best treatment option. Alternatively, Gualtieri provided Sig’s family with three radiation therapy options: stereotactic radiation therapy (SRT), Intensity-Modulated Radiation Therapy (IMRT), and palliative therapy. Ultimately, they elected 18 doses of IMRT, which delivers a small fraction of radiation to the tumor each day.

“It’s been an up and down,” said Pat. “We had so much going on and so much information to process. But we listened, and it all came together to help us make the right decision for Sig.”

As a regular radiation oncology patient for the next four weeks, it didn’t take Mr. Personality long to make friends around the hospital. One special friend was a little French bulldog named Sarek, who had a spinal tumor and maneuvered around with the help of a wheelchair. 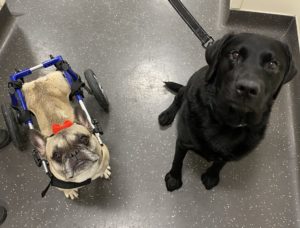 According to radiation oncology technician Megan Willman, Sig and Sarek were pretty much instant friends. Sarek was staying overnight at the hospital during his treatment, so each morning, one of the techs would bring him into the radiation oncology clinic, and he’d wander around while staff prepared for the day.

The first time Sig met Sarek, he was ready to play. Initially, Sarek was a little overwhelmed by Sig’s enthusiasm, but they quickly developed a morning routine. When Sig arrived for the day, he would find Sarek and begin a game of bow and chase. Their friendship transformed the clinic into a mini dog park and brought joy and smiles to the staff every morning.

“It was adorable to see two very different dogs, both going through IMRT, bond and have so much fun together,” said Willman.

“The radiation oncology team made the whole experience so positive for Sig and us, but we have to say Sig’s friend Sarek made his time at the hospital fun,” said the O’Rourkes.

Sig completed radiation therapy in early February, and the O’Rourkes headed home to Arizona. Now, more than a month later, Sig’s energy has returned, and he’s back to his morning walks and meeting new friends. The family looks forward to celebrating Sig’s fourth birthday at the end of March. 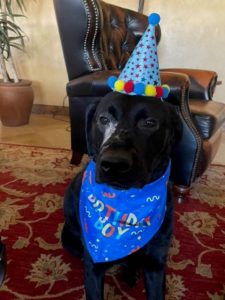 Though grateful for the advanced diagnostics and treatment options available for Sig’s care, the family shared their specific appreciation for the radiation oncology team’s kindness and compassion.

“After our first meeting with Dr. Gualtieri, we could feel how dedicated and committed she was to her patients. We were also fortunate to work with Dr. Reczynska, who was so compassionate and caring. And Megan, Sig’s radiation tech, greeted us every morning of his 18 treatments, even during a blizzard, sub-zero temps, and an ice storm. She was always so positive and caring – it really helped get us through this ordeal.” 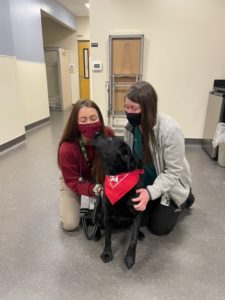 The O’Rourke family hopes that sharing their experience will give other families peace of mind, knowing that their beloved pets will be taken care of by dedicated and well-trained professionals who are committed to offering their patients the best possible outcome.

“We had full trust in the team,” said the O’Rourkes. “We hope everyone has access to a place like CSU for their pet’s care.”