Patronus “Groot” Gordon joined his furever family in 2015. Like his Guardians of the Galaxy namesake, Groot has been winning over fans since day one.

“He’s such a sweet guy and handsome, too,” said Chris Gordon, Groot’s human dad. “I knew right away he was the one.”

Groot was a gift to Chris’s girlfriend, now wife, Misti.

“When I first met Misti, every time we were in the car, she would point out the Great Danes she saw walking along the street,” said Gordon. “She had two Great Danes in the past and really missed them.”

Chris started looking for a Great Dane to bring home as a surprise. Groot was the last male available in his litter, but Chris knew he was the right pup immediately.

“He won me over from the beginning.” 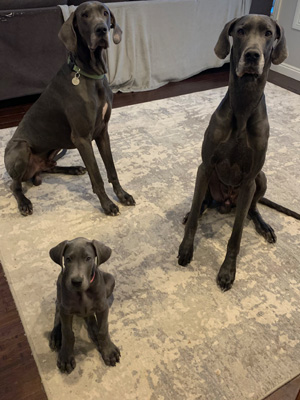 Groot quickly adjusted to life with his family, and the Gordon’s learned about his playful side.

Among his favorite things to do is a game the family calls “gimme,” a form of keep-away that he’s ready to play as soon as someone walks in the door. He also loves visits to the dog park to play with four-legged friends.

“He’s great with kids and other dogs; he’s so aware of his size. We call him a gentle giant.”

The Gordon’s loved Groot so much that they added Groot’s son and daughter, Rocket, and Gamora, to their family a few years later.

“He’s such a great dad,” said Gordon. “He loves to play with his kids. Gamora is a daddy’s girl, and she loves to snuggle with him.”

As part of his playful nature, Groot routinely jumps over the couch in the family home. One day, after a jump, he started limping

“I thought he tore a tendon,” said Gordon.

Groot had always been healthy, so they were in disbelief when the Gordons heard the cancer diagnosis.

“It came as a complete shock. I thought, no way, this can’t be right. He’s the healthiest dog.”

Not knowing anything about bone cancer, the Gordons consulted three different veterinarians. “They all recommended amputation,” said Gordon.

At their first appointment, the family met with One Cure clinical trials intern Dr. Kristin Sawyer and learned about a new clinical trial for dogs with bone cancer. The trial offered the opportunity to spare Groot’s leg by removing the bone tumor and replacing it with a state-of-the-art personalized 3D-printed bioreplaceable implant. Groot also would receive chemotherapy to treat any microscopic disease lurking in his system.

The Gordon’s like the idea of a clinical trial and wanted to try to save Groot’s leg, if possible.

“We thought the clinical trial was a win-win. If it would help Groot be more comfortable in the long run, give us more time with him, and help others – it’s what we wanted to do.”

The Gordons crossed their fingers and hoped Groot would qualify.

“Groot was a good candidate because his tumor was not too large, and he met all traditional criteria for limb spare surgery,” said Dr. Bernard Séguin, surgical oncologist at the Flint Animal Cancer Center and head of the clinical trial.

Groot was the first patient enrolled in the pilot study, and his surgery was performed in late November 2021. 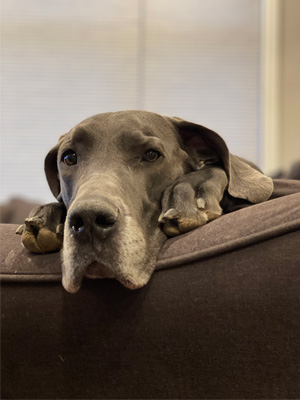 Gordon admits the recovery from surgery wasn’t without its challenges. The family dedicated themselves to Groot’s care making sure someone was with him 24 hours per day to keep watch.

“The first two weeks were tough,” said Gordon. “Groot needed a lot of assistance getting up, laying down, and going outside.”

Two months out, Gordon shared that things are getting easier and are happy to report that Groot is tolerating chemotherapy very well. Despite some of the long days, Gordon believes they made the right decision.

“We’re super happy,” said Gordon. “We’ve received the absolute best service of anywhere. Working with CSU has been an incredible experience – to have so many people dedicated to Groot’s care and showing their concern is amazing.”

Like all pet parents, Gordon hopes Groot will live forever, but realistically he hopes for another year and sees every day as a gift. His focus is on keeping Groot as happy and comfortable as possible.

“We want him to be a success story.”

Gifts to One Cure support our clinical trials program, which works to discover better treatments for pets and people with cancer. Please consider donating today.