Often, the first thing people notice about Sherpa is her heart-shaped nose, an advertisement for her friendly nature. After a joyful and sometimes slobbery greeting, they realize she has three legs.

The 8-year-old Saint Bernard was born with a cleft lip and palate, and the reconstructive surgery soon after birth resulted in her unique muzzle. A cancer diagnosis when she was seven years old led to an amputation of her rear right leg. 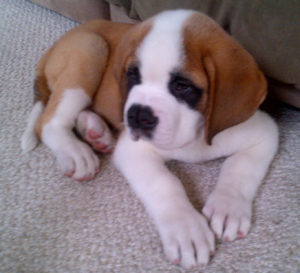 “Her spirit is pure love,” said Sherpa’s human Marta. “Sherpa brings joy and smiles to everyone she meets. Sherpa is a mountain celebrity at an ice climbing festival where money was raised, offering cookies baked in the exact shape of her nose. Everyone wants a wet kiss and hug from Sherpa.”

Sherpa’s home is in the mountains of Colorado, and she’s been Marta’s constant companion since puppyhood. They spend as much time as possible outdoors, skiing, hiking, ice climbing, and exploring.

A typical Saint Bernard, Sherpa loves everything about the snow from jumping and running through it to eating it. “She’s my beautiful snow baby,” said Marta.

Sherpa’s active lifestyle and happy energy may be the reason they realized something was wrong almost immediately.

“We were out of town when Sherpa’s caretaker, who happens to be a vet tech, noticed her limping and tender in her rear right leg,” said Marta.

Concerned with this unusual behavior, they went straight to their veterinarian. X-rays revealed Sherpa had a hairline fracture likely caused by a bone tumor.

Facing the difficult news, Marta scheduled an appointment at the Flint Animal Cancer Center. Hoping to save Sherpa’s leg, Marta was particularly interested in learning more about radiation therapy.

During their first appointment, the Flint Animal Cancer Center radiation oncology team reviewed Sherpa’s case history and diagnostics. Marta found out that Sherpa was not a good candidate for radiation therapy because the treatment would prevent the fracture from healing and could predispose her to additional injuries. The same day, she also learned about surgical options.

“On our first visit, we heard the pros and cons of various treatments, ruled out radiation, and were able to speak with the surgeons about limb spare surgical options as well as amputation,” said Marta. “The doctors were so generous with their time and with the information they provided, and they also gave us the time we needed to make the best decision for Sherpa.”

“It was a heart-wrenching decision,” said Marta. “She’s our baby, and we were so worried about how losing a leg would impact all of the outdoor activities she loves to do. Sherpa was in incredible pain from the osteosarcoma, and after learning as much as possible about each option, amputation was the best decision forward for Sherpa.”

Sherpa’s amputation surgery was a success, and she was walking well on three legs almost immediately.

“In addition to the oncology team, I’m grateful to Laura Southworth, Sherpa’s rehab technician. She was critically important to Sherpa’s recovery and provided several physical therapy exercises and assist tools, such as a harness, that helped Sherpa learn to navigate on three legs. Laura further worked with Sherpa every time we came for treatment post-amputation.”

After recovering from surgery, Sherpa began chemotherapy to treat any remaining microscopic cancer cells. She received six doses of carboplatin over four months. 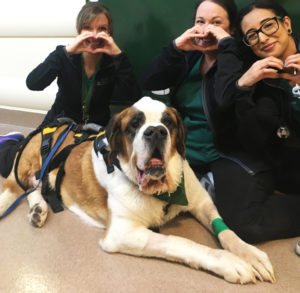 As they settled into the routine, Marta was happy that the visits for physical rehab added a kind of trip to the spa for Sherpa. “Sherpa lit up at the hospital. Everyone from the front desk to the business office to the clinical team and pharmacy provided such a happy experience; it was almost like a spa day for Sherpa.”

“I felt like they truly cared about and treated Sherpa with love and respect and that they cared about us as well.”

“Sherpa is such a sweet girl,” said Dr. Siewert. “She has captured the heart of so many of the staff throughout the hospital. After seeing her through a rough patch, she’s done incredibly well with treatment. I admire her strength, and I am grateful she has additional time with her family.”

“We adore Sherpa, and I’m pretty sure she knows it,” said Bluhm. “She always walks right in and is happy to see us. We’re all so happy she is feeling better!”

Sherpa recently finished chemotherapy, but she will return to the cancer center every few months for rechecks.

At 150 pounds, Sherpa is doing amazingly well as a tripawd months after surgery. Although she doesn’t have the same stamina, with some adaptations and assistance, she can do most of the things she loves to do. Her new bed provides some extra support, and she wears a harness to help when it’s hard to get up or to get in the car.

“She can’t do everything she did before surgery, but she’s doing remarkably well,” said Marta.

“Incredibly, she’s back to ice climbing with us. We modified a sled so that we can pull her along in if she gets tired.”

Reflecting on Sherpa’s cancer journey, Marta admits that the diagnosis was devastating and hard to accept. Sherpa received the best care possible her whole life, so this diagnosis was particularly challenging. Just like with humans, cancer can happen to any dog – in short, “cancer sucks.”

“We feel lucky to have the best doctors in the world right here in Colorado,” said Marta. “Through seeking treatment, we were hoping to gain as much time as possible with Sherpa. What’s so fantastic is that she has this amazing quality of life. We have no doubt that we made the right decision.”