I am writing this letter to introduce someone special and tell her story. Her name was Ginny.  She was a female Goldendoodle who touched mine and countless people’s lives. Her story is a glorious yet sad celebration of life and just how precious it can be.

Ginny entered this world on December 4, 2018. She was a gift to us from my mother. She had been interested in owning a Goldendoodle and found a breeder in Nebraska looking to get out of breeding. They had two remaining pups from their last litter. My Mom claimed the brother, Scout, and she proposed we should take the last puppy they had left, a small girl we named Ginny. My wife and I were unsure if we were ready for a pet and were very nervous to see how things would go. We had just purchased a new home with a spacious yard and decided to lean into it and take the leap of faith. We brought her home when she was about 12 weeks old. She immediately melted our hearts, and the immense love we felt for her was instant. She was so adorable, playful, and kind. She was incredibly smart. Training came effortlessly, and she began to go everywhere with us.

She grew up so fast. She began to accompany us on trips, hikes, and anywhere else we went. My favorite thing to do was take her on a nice hike with a beautiful view where she could roam and take in all the sights, smells, and sounds. We would chase each other around the football field at our local high school when I got off work, and we were out for our nightly walk. Ginny made friends wherever she went. Her laid-back, friendly personality made sure there wasn’t an animal or person nearby that couldn’t be her friend or not be included in whatever activity she was a part of.

During a walk in April, I noticed Ginny had a limp that would not go away. She was diagnosed with elbow dysplasia and had surgery to correct it at Royal Vista Veterinary Services in Windsor. Surgery went great, the elbow was fixed, and she was on her way to recovery. However, as she recovered from surgery, a large lump started to form on her right shoulder. At one of her checkup appointments from surgery, what we originally thought was a hematoma was actually a tumor called a hemangiosarcoma that had already spread to her lungs.

We were immediately referred to the CSU Veterinary Hospital and the Flint Animal Cancer Center. My wife and I were in complete and utter shock. Ginny was only two years old. This shouldn’t happen to a dog her age. We didn’t know if there was a fight to be had or if we could even afford such a giant fight. As we anticipated our initial appointment, we were afraid and were totally unsure of what the future had in store for Ginny.

Our fears and concerns were immediately lifted away upon meeting the hospital staff. Everyone was so kind, understanding, and professional. Things were organized and efficient, even given the fact that all of this was occurring amidst a global pandemic. We were informed we could fight this thing and possibly get some extra quality pain-free time with Gin. Every person who worked with her took care of her as if she were their own. The hospital and its generous donors even helped us afford treatment and eased some of our financial stress. The staff really took the time to know Ginny and spent quality time with her. They knew how she was doing on a weekly basis and always made nice comments about how beautiful her eyelashes were, how much they enjoyed her long fur on her paws, or how wonderful she was to have around and hang out with in general. We could tell they knew her. Ginny was always excited to go to the hospital for treatment, even when treatment began to take its toll on her. Getting to see everyone’s smiling faces and hang out with the staff was always enjoyable for her.

Due to the nature of Ginny’s aggressive tumor, the medical team at CSU’s Flint Animal Cancer Center waited no time in amputating her right arm at the shoulder. We were told that with surgery and chemotherapy of this particular type of tumor, dogs, on average live an extra 4-6 months. We elected to go that route. Surgery was complicated, and she needed several transfusions to make it through. Other medical professionals were nervous about doing the surgery given the massive size of her shoulder tumor that was about grapefruit sized at that point. CSU’s fearless staff never even blinked and scheduled the surgery for Ginny. She made it through the difficult surgery and began post-surgery treatment. She received chemotherapy and had some troublesome skin tumors radiated to attempt to slow the growth. Doctors had hoped to remove the entire tumor but given the size and the fact it had spread to her lungs, that was not possible.

We had to take a lot of time off from work to help Ginny recover from surgery. My wife and I are both teachers at the middle school here in Laramie. Our students and coworkers supported us as best they could, and they saw how hard Ginny was fighting and how strenuous it was for us to miss so much time and be away from the students. So given there were about two weeks of school left, our principal proposed we bring Ginny to school during the day. She was still recovering from her amputation, and we didn’t know if it would be a good idea, but we decided to try it. 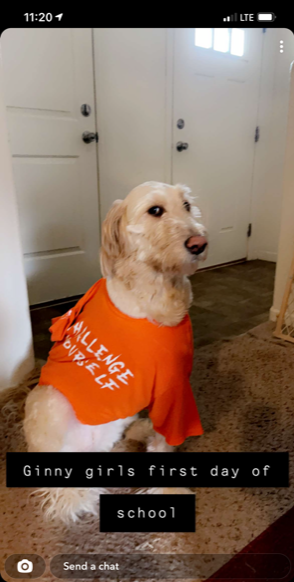 Taking Ginny to school with us turned out to be one of the best decisions we ever made. Ginny had a bed behind my wife’s desk, and we brought pillows, blankets, toys, and of course, lots of treats to make sure she was comfortable between our two classrooms. Admittedly a distraction at first, Ginny became a part of our classrooms and our school. School became one of her favorite places to be, and she looked forward to us loading her up and driving her there in the mornings. Students would come to see her every day, and she loved all the constant attention as she recovered. If we took our eyes off her for a split second, she would leave and wander the hallways looking for people to hang out with. She blossomed into a social butterfly. We could see life and passion returning to her eyes. On the last day of school, Ginny was showered with gifts and treats as students said goodbye for the summer.

She adapted to life on three legs almost instantly. It felt like our dog was back. She played, chewed on her toys, and enjoyed her appetite again. Soon, we were going on short walks again around our neighborhood, something I thought we would never get to do again. She was happy and living her absolute best life. We knew surgery would be risky, but this confirmed to us that it was worth it.

Unfortunately, we knew these good times would not last forever. Radiation treatments were very effective in shrinking her tumors, but her tumors would not respond to chemotherapy. When her breathing and quality of life began to decline, we made an impossibly hard decision to end her treatment and stop her fight. Typically a timid pup, Ginny had found her strength and courage in this fight. We knew she would never stop fighting, but she was getting tired. She taught us something about bravery and being strong. On July 15, she left this world a fighter. She never beat her cancer, but she was never going to give up and went out swinging just like we hoped she would.

We have received tons of support and people wishing us the best and wanting to give their sympathies. The number of people she was able to touch and affect was nothing short of amazing and inspiring. We want to thank CSU and the Flint Animal Cancer Center for their compassionate, quality care and giving us extra quality time with Ginny. They allowed her to make those extra connections. If we could go back and do this all again, we wouldn’t change anything. We’d have no regrets taking her to that fine medical facility and making those same decisions. We’d also like to thank all our friends, family, and coworkers who loved and supported Gin in her battle. It took everyone to help Ginny and us through this.

We have learned way too much from Ginny and this experience not to let you all know who she was and what she stood for. She believed in seeing the good in everything and everyone. Life and its challenges can be unfair, but how we respond to those challenges says a lot about who we are. She rose to those challenges and then some. Things will feel sad for a while simply because, in two and a half short years of her life, the happy memories we have together with her are numerous and overwhelming. If you played a role in her life, no matter how big or small, thank you all again from the bottom of our hearts. I know Ginny is smiling down on all of us, knowing there are such good people in this world that still remember and care for her.